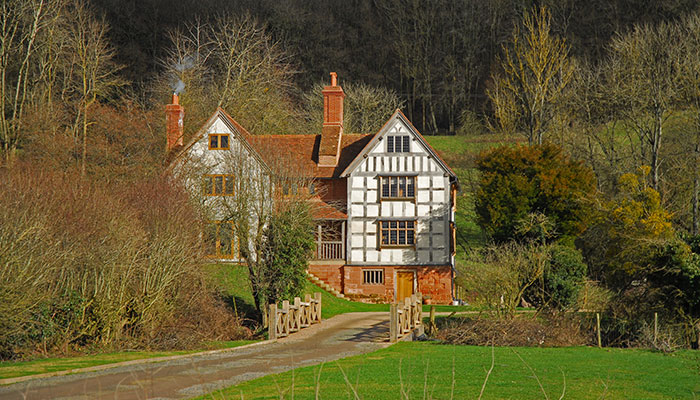 The Old Court House sits hidden in the midst of a large farm complex in private ownership. The farm had been bought with a number of outline consents for the conversion of farm buildings to dwellings and staff accommodation but these consents were all linked to the repair of the Old Court House which had been derelict for over 30 years and was on the buildings at risk register.

The building itself was shrouded in mystery. The Local Planning Authority had placed a Section 106 agreement on the property detailing its rescue from dereliction and were minded to increase its listing status to Grade I as it was rumored to be a hunting lodge gifted by Queen Elizabeth to Robert Dudley, 1st Earl of Leicester. Dendro-dating carried out during the course of the works confirmed that the building had been constructed in phases between 1526 and 1613.

The repair and conservation of the Old Court House has been particularly challenging but rewarding project requiring a wide range of conservation skills and the use of specially made components (bricks and tiles) combined with modern technologies such as Hempcrete.

On appointing Shire as Structural Engineers to the project, Rhys Brookes from Harrison Brookes Architects comments:

“Working on historic buildings can be very challenging, especially when they are derelict or in significant distress and at risk of collapse.  Such was the case with the Old Court House, in Worcestershire.  The ability to work with, rather than against the building in an attempt to save it required a special type of engineer capable of thinking laterally and coming up with creative, yet sensitive, solutions to often complicated problems.  It was for this reason that Harrison Brookes Architects approached Shire and in particular Richard Hartshorne who brought a pragmatic and calming influence to this taxing project.  In order to save the building Shire were able to identify key structural elements and helped evolve a method for catching the building with an external skeleton which enabled the building to be safely repaired and jacked back into place without dismantling.  The result was the retention of practically every last bit of historic fabric and a retention of the building’s character”.

Shire were proud to be appointed as Structural Engineers for the project.  Richard Hartshorne, Director of Shire commented:

“The most challenging part of the project was ensuring that the structure remained stable during the restoration works. Complex temporary works were needed to stabilise the building and make it safe for operatives to carry out the numerous repairs needed to allow the building to function as it should. It was a rewarding experience salvaging as many elements of the original structure as possible”.

To date, The Old Court House has achieved the following: 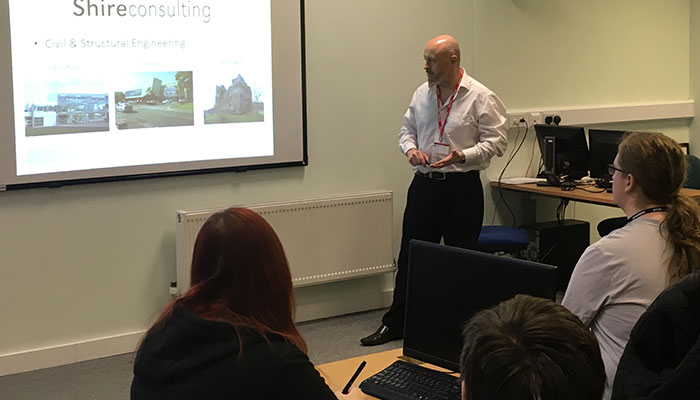 Teaching Visual Communications to Students at Heart of Worcestershire College

Three times a year, Shire’s Mark Hartley sets off for Heart of Worcestershire College to teach a module in visual communications.  Mark, who heads up the Telecommunications Design Team for Shire, has written a specific module for the Foundation Degree in Interactive Media & Games design.

The first step is an introduction to Shire and how photomontage is used in a commercial environment.  Mark teaches the students about the importance of 3D modelling, photomontage and other visual skills to communicate design vision & design details to various people involved in the building industry.

The final project for the course is fully flyby & walkthrough a newly designed building with full 3D modelling and animation.

This is our 9th year of doing the course and have at times employed some of the students to work in the telecoms dept. 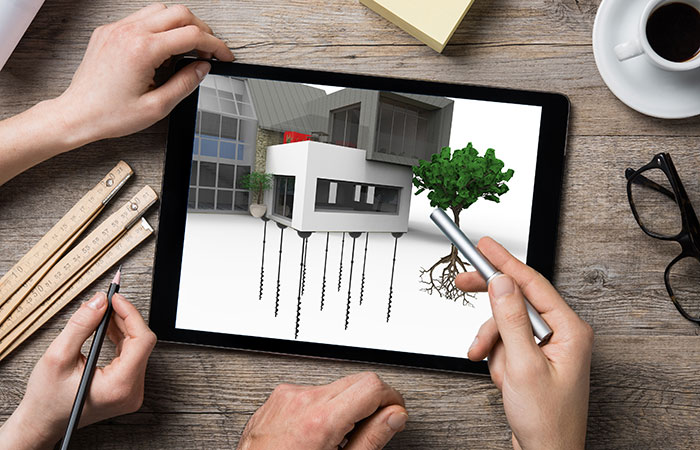 The entire stability of any building is dependent on its foundations.  Every year in the UK, millions of pounds are spent repairing damage to buildings caused by foundation failures.  Preventing these problems early is far less expensive than rectifying them afterwards. The most common factors to consider are rapid changes in soil moisture, soft ground, drainage or lack of design consideration:

Clay shrinkage: Fluctuations in moisture content don’t cause significant variations in the volume of sandy soils.  However, clay soils expand when they are wet & shrink when they are dry. If a structure is supported on clay that is moving in this way, the building will move with it causing damage. Trees can cause shrinkage down to 4m.

Clay heave: As tree roots pull moisture out of the clay, the soil shrinks and ground level drops.  If a tree stops extracting moisture, then the clay rehydrates & swells.  The forces generated by swelling clay are large enough to lift up any structure. A common cause is when trees are removed from a site.  Ground heave can start immediately and continue for months & years afterwards.

Soft ground: Some soil types are weaker than others and not strong enough to support building structures.  These include river alluvial deposits, peat & man-made soils.  When foundations are dug into these soils, the building’s weight can cause movement in the soil’s structure.

What steps can be put in place to prevent foundation problems occurring? Below are 4 practical steps to consider:

At Shire we design foundation systems for a wide range of project types.  We have developed patented systems like QuickBase giving deep piled foundations that can be taken down to depths below the zone of influence of any tree roots or down to 20m in soft soils to find ‘good ground’.  QuickBase has also been designed to be installed in areas where parking & access is restricted.  Foundations are installed quickly, often leading to cost reductions in the overall schedule.

Where there are unknown ground conditions, our geotechnical team can investigate and give advice on the appropriate solution.